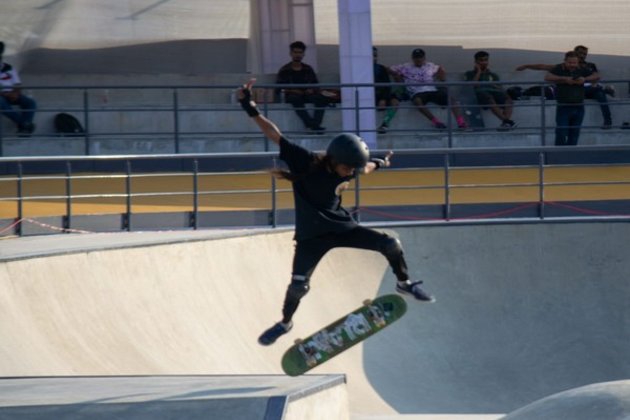 Ahmedabad (Gujarat)[India], October 4 (ANI): Maharashtra emerged as the champions with five gold and Tamil Nadu the runners-up with three as the Roller Sports events in the 36th National Games drew to a close after wowing crowds for three days at the picturesque Sabarmati Riverfront.The real heroes, however, were street skateboarders Chingngbam Ranju Singh (Manipur) and Shraddha Gaikwad (Maharashtra) who have taken fascinating, slightly tough, routes to success and popularity.The Men's gold medal winner Ranju Singh got hooked to the sport five years ago but had to be innovative to follow his training regimen. Every day, he wakes well before dawn in Manipur before the city wakes up.In the darkness, and on empty streets, he first learnt the nuances of the sport and then mastered it. He became good enough to be selected for his state and now he has even won the ultimate glory in the National Games.

Of course, there was the little matter of finding funds to buy his skateboarding kit. "I took up several part-time jobs, including whitewashing, to fund my training," Ranju Singh said.

Shraddha Gaikwad, the Women's Skateboarding gold medal winner, has an equally intriguing story to tell. Her father, a security guard, shifted from Beed to Pune in search of a job. He found one at an international sports goods-selling giant.One day, Shraddha Gaikwad came to deliver lunch for her father and saw an interesting sight."I saw people skateboarding at the store and tried my hand at it. The store manager Abu Sheikh saw me practice and gifted me a pair of shoes and a skateboard. I began training and I soon became pretty good at it," the 16-year-old said.Shraddha's story has been captured by a Netflix movie called Skater Girl.They are now hoping that their success in the National Games will open up new avenues for support as they focus on qualifying for the Asian Games next year. (ANI)