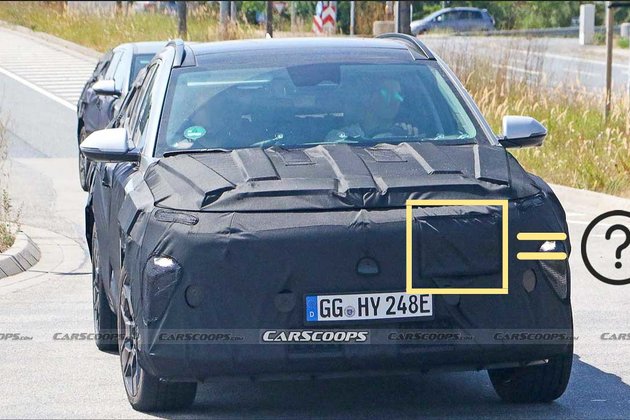 Kia and Hyundai combined, are underdogs that will soon match the might of Tesla and BYD in the future. Hyundai has been developing strategic products to compete with well-established EV giants. The South Korean company is also taking on current hottest EV in the world, Tesla Model 3 with upcoming Ioniq 6.

Hyundai and Kia are eyeing large electric SUVs too, as we recently saw Kia EV9 under testing and will soon be followed by Hyundai Ioniq 7. 1st gen Hyundai Kona EV facelift is already sold in some markets. The company is also testing 2nd gen Kona EV based on 2nd gen ICE-powered Kona which is also under testing.

For starters, these test mules were spotted just outside of Hyundai / Kia technical centre in Germany. The test mules for Kona EV are almost identical to test mules of regular ICE-powered Kona. But with keen eyes, they can be distinguished from each other even under heavy camouflage.

This Kona EV facelift was not launched in India. This suggests that the 2nd gen Kona EV will be based on an updated platform of its 1st gen. Second, if we look at the rear, there is no exhaust pipe visible. Like, obviously. Hence, confirming that the latest Kona test mule is in fact, an EV.

What Can We Expect?

Less camouflaged ICE-powered Kona test mules have been spotted globally. It sports a full-width LED lightbar at the front as seen on other Hyundai products like Staria and Stargazer. It is also likely to get a trapezoidal-shaped LED headlight in its bumpers. Grille on ICE-powered Kona 2nd gen will be closed off for that typical EV appeal that we also see in MG ZS EV.

It will also get body cladding all around and Ioniq 5 inspired minimalist interiors. In terms of powertrains, Hyundai is mum on this matter. But as Kona EV is expected to be similar to Kia Niro EV, we can expect the same motor and battery to be shared. Kia Niro EV gets a 200 bhp electric motor which draws power from a 64.8 kWh battery.

Kia Niro EV can cover a claimed 463 km of range on a single charge with this relatively large battery. But Hyundai can also offer a smaller battery with a less powerful motor which will eek out a similar range on base variants. We say this because that's similar to what we got in India with the first gen Kona EV. India launch isn't confirmed yet, but we still have a long time as it is expected to hit global markets in 2024. Apart from ZS EV, it will also rival upcoming new SUVs from Tata and Mahindra.

US to purchase $1.1 billion in arms for Ukraine

WASHINGTON D.C.: Pentagon officials have announced that an arms package has been approved for Ukraine worth $1.1 billion, which includes ...

US acts to reduce risks from space debris

ALBUQUERQUE, New Mexico: New Mexico district attorney Mary Carmack-Altwies has said that actor Alec Baldwin and up to four others ...

US again returning money to victims of Bernie Madoff, 88% recovered

WASHINGTON D.C.: The U.S. Department of Justice has announced that after nearly 14 years, the victims of Bernard Madoff's Ponzi ...

After sanctions, Russia says will build own aircraft, not rely on west

MOSCOW, Russia: Russia's state-owned engineering firm Rostec has said that the country's aviation industry will continue operating without the West, ...

SYDNEY, NSW, Australia - Stocks in Asia moved sharply higher on Tuesday despite markets in Hong Kong and Shanghai being ...

Lego closes stores in Russia, being reopened under name World of Cubes

MOSCOW, Russia: After Danish toy maker Lego exited Russia due to Moscow's February invasion of Ukraine, 65 of its stores ...

GENEVA, Switzerland: In an effort to ease power shortages this winter, the Swiss government said it will temporarily loosen water ...

The Light Between Oceans