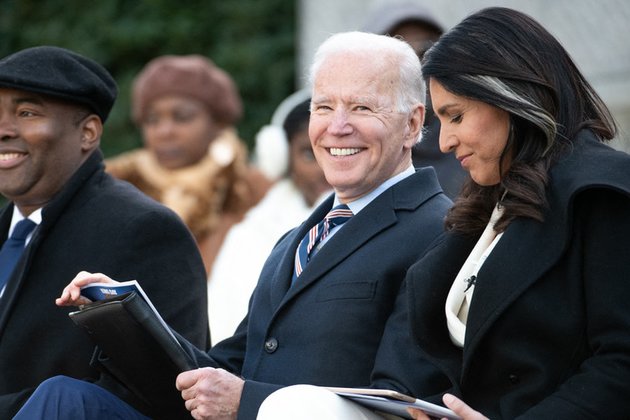 Ex-presidential candidate Tulsi Gabbard has called out President Joe Biden for delivering what she described as a shockingly divisive speech on voting rights, and even some close allies in the Senate admit he went ?too far.?

Gabbard, an outspoken critic of the president before she dropped out of the 2020 primary and traded in her distaste for the career politician for a guarded endorsement, has renewed her criticism of Biden, accusing him via Twitter on Wednesday of smearing his ideological opponents as "domestic enemies, traitors, and racists."

The former Hawaii congresswoman argued that Biden's speech in Georgia on Tuesday was even worse in terms of dividing the American people than the words of failed Democratic presidential candidate Hillary Clinton, who infamously said in 2016 that half of Trump's supporters were "a basket of deplorables," which some suggested helped deliver the vote to Donald Trump by alienating potential swing-state voters. Clinton has since said she regrets using the term, which some Trump supporters took on as a badge of pride.

The president's speech ripped lawmakers who refused to dump the filibuster to make it easier for Democrats to pass a controversial package of voting rights legislation. Challenging whether they wanted to be "on the side of Dr. [Martin Luther] King or George Wallace" or "Abraham Lincoln or Jefferson Davis," Biden painted the debate over dumping the filibuster as a simple matter of good versus evil, rankling opponents such as Gabbard and allies like Senator Dick Durbin (D-Illinois) alike.

On Wednesday, Durbin admitted Biden had probably gone "a little too far in his rhetoric" in hammering opponents of his voting rights package, which includes the Freedom to Vote Act and the John Lewis Voting Rights Advancement Act, as racist throwbacks to the pre-Civil Rights era. However, he argued that ditching the filibuster was necessary, because the Democrats couldn't otherwise get anything done in the Senate.

CNN's Jake Tapper pushed the senator even further during an interview on Wednesday, questioning the wisdom of comparing voter ID laws to racist politicians in the civil rights era demanding the siccing of dogs on civil rights protesters. "Isn't that a little stark?" he asked, leading Durbin to concede the point.

Biden and many in his party have called for the filibuster to be scrapped in order to make it easier for the Democratic Party to pass desired bills in the future. However, as Tapper pointed out to Durbin, should Republicans take control of the Senate again in a post-filibuster session, they would be free to pursue whatever legislative goals they liked without worrying about having to lure members of the opposition party to their side.

Snow storm closes much of Greece, including Athens

ATHENS, Greece: A severe snowstorm that swept across the Mediterranean region has stranded thousands of motorists on a motorway in ...

BRUSSELS, Belgium: A European Union watchdog, the European Court of Auditors (ECA), has warned that the EU faces considerable economic ...

FORT PIERCE, Florida: The U.S. Coast Guard is searching the waters off eastern Florida, with hopes of saving 39 missing ...

BANGKOK, Thailand: In a landmark move, Thailand, on January 25, emerged as the first Asian nation to decriminalize the use ...

TAIPEI, Taiwan: In its largest sortie in 2022, China sent 39 warplanes towards Taiwan on January 24, amidst tensions over ...

PARIS, France: Under the latest COVID-19 rules adopted by the French government, leading tennis player Novak Djokovic could be allowed ...

SATKHIRA, Bangladesh - The Royal Institute of British Architects (RIBA) has recognized an 80-bed Bangladeshi hospital in the coastal area ...

In bid to move supply chain to US, Intel to build chip plant in Ohio

SANTA CLARA, California: Chip maker Intel has announced that it will invest more than $20 billion in two new chip ...

MENLO PARK, California: Facebook's parent company, Meta, has announced the creation of what it believes is among the fastest artificial ...

Casino plans to build in UAE in Gulf region

RAS AL-KHAIMAH, UAE: Ras al-Khaimah, one of the UAE's seven emirates, has announced the signing of a multibillion-dollar agreement with ...