Engage and explore the reward with QTC's IDO Program

Hey everyone! Here is the good news for all of you:

Come join us and avail the opportunity to be part of QTC's first biggest social media activity.

QTC is about to open IDO activities on Twitter, Telegram and Discord communities will carry out activities at the same time. The activity time is November 5th at 03:00 UTC to November 15th 03:00 UTC.

The first wave of public participation is finally opened since the main network of distributed search engine QitChain was launched. Qitcoin has announced the opening of a worth $120,000 QTC event that will be live on Nov 5 at 03:00 AM UTC.

All eligible participants can receive rewards from $30 QTC up to $300 QTC.

There is also a chance to participate in the lucky draw.

There are various ways of taking part in the activity:

First essential step is to repost our Twitter post where Qitcoin QTC has officially announced IDO activities, and bring the hashtag #Qitchain #QTC. After that, join the QTC official Telegram and Discord group. Take and keep the screenshot and submit it to us. 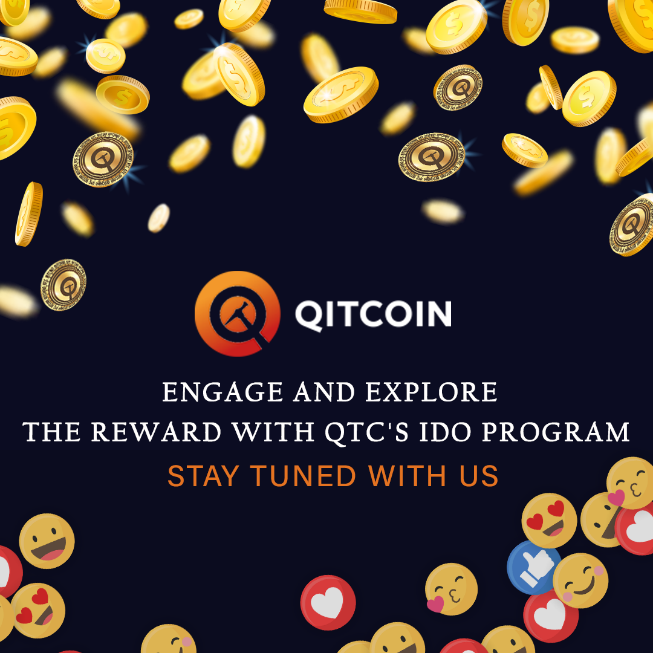 Note: If you meet one of the above conditions or any other interaction with the QTC official, after the official approval and forwarding, you can get a reward of 0.5QTC.

Another reward is waiting for you. QTC officials will randomly select lucky users (1% of the total number of participants) from the above winning users, and reward 2QTC.

Participants can create and publish QTC-related articles on Twitter and Facebook (one of them), and @QTC official.

More perks are waiting for you!

You can get 5QTC rewards if one of the following conditions is met:

The original article or video of Qitchain is posted and reposted on Twitter and adopted by the official. The above original video or article can be published in Chinese, English, Japanese, Korean or any other languages. It should be published in relevant channels where they can get high attention.

Important! There are few users who cannot participate in the activity

Those participants who have one-time accounts, bots, fake users, twitter accounts that are private and not shared with non-friends are not eligible for this activity.

Before taking part in the activity check first to re-follow or re-enter users and our reward distribution rules. Another important element to know is that all award lists will be announced on November 17 and the rewards will be issued no later than June 2022.

The method of distribution is tentatively determined (reward package). The reward package is limited to the total 2000QTC. Rewards shall be provided on first come first served rule. The final interpretation right of the event belongs to the official Qitchain.

So, don't miss this golden opportunity and gear up for the IDO activities that will start on November 5th at 03:00 UTC.

FORT PIERCE, Florida: The U.S. Coast Guard is searching the waters off eastern Florida, with hopes of saving 39 missing ...

BANGKOK, Thailand: In a landmark move, Thailand, on January 25, emerged as the first Asian nation to decriminalize the use ...

TAIPEI, Taiwan: In its largest sortie in 2022, China sent 39 warplanes towards Taiwan on January 24, amidst tensions over ...

PARIS, France: Under the latest COVID-19 rules adopted by the French government, leading tennis player Novak Djokovic could be allowed ...

WASHINGTON D.C.: The percentage of students graduating from U.S. high schools in 2021 plummeted in twenty states due to Covid ...

GAINESVILLE, Florida: Shark attacks soared worldwide in 2021.Research conducted by the Florida Museum of Natural History and the American Elasmobranch ...

In bid to move supply chain to US, Intel to build chip plant in Ohio

SANTA CLARA, California: Chip maker Intel has announced that it will invest more than $20 billion in two new chip ...

MENLO PARK, California: Facebook's parent company, Meta, has announced the creation of what it believes is among the fastest artificial ...

Casino plans to build in UAE in Gulf region

RAS AL-KHAIMAH, UAE: Ras al-Khaimah, one of the UAE's seven emirates, has announced the signing of a multibillion-dollar agreement with ...

SYDNEY, NSW, Australia - It was a bloody day on Asian markets on Thursday following gyrations on U.S. markets overnight.A ...

Ireland has 17th highest fuel prices in world, up one-third since 2021

DUBLIN, Ireland: Ireland has among the highest prices for petrol and diesel in the world.In the past year, fuel prices ...