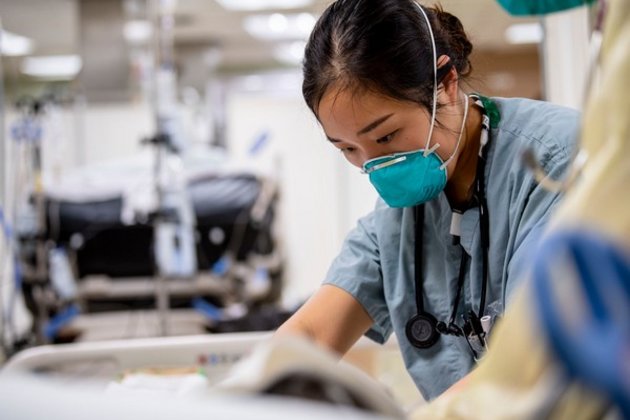 Washington D.C. [USA], May 21 (ANI): Asian American health-care workers in the United States have reported a rise in bigoted incidents in recent weeks that has left the entire community, who represent 6 per cent of the total population, in a painful position on the front lines of the response to the coronavirus pandemic.

Due to the racial hostility, some covid-19 patients refuse to be treated by the doctors and nurses from the Asian American community, who represent 18 per cent of the country's physicians and 10 per cent of its nurse practitioners, The Washington Post reported.

And when doctors and nurses leave the hospital, they face increasing harassment in their daily lives, too, including racist verbal abuse and physical attacks. The Federal Bureau of Investigation (FBI) has also warned of a potential surge in hate crimes against Asians as the coronavirus death toll mounts and stay-at-home orders are lifted.

Three Asian-American medical providers on the front lines of the pandemic spoke with the Post about the racial discrimination they faced as the virus spread on.

A man followed Lucy Li, a Chinese American doctor from the Boston hospital, spewing a profanity-laced racist tirade as she makes the rounds in the covid-19 intensive care unit. "Why are you Chinese people killing everyone?" Li recalled the man shouting. "What is wrong with you? Why the f--- are you killing us?"Stunned at first, then relieved she was not physically attacked, Li, 28, is now saddened and angered by the irony that she spends her days and nights helping save lives. Her work inserting tubes in patients' airways has grown riskier since the coronavirus emerged -- each procedure releasing droplets and secretions that could carry viral particles.

"I'm risking my own personal health, and then to be vilified just because of what I look like," Li was quoted as saying.

"I try not to think about that possibility when I'm at work taking care of patients. But it's always there, at the very back of my mind," he added.

Some academic experts on race say President Trump's rhetoric around the virus and China has contributed to the rise in racial harassment. For weeks, Trump deliberately referred to the coronavirus as the "Chinese virus" despite guidance from public health officials to avoid attaching locations or ethnicity to a disease. He has since tweeted that Asian Americans are not to be blamed for the virus's spread.

"People are worried about transmission of a disease that they associate with foreignness and Asian faces," said Grace Kao, a Yale University sociologist, told the Post.

An analysis of self-reported incidents by Russell Jeung, chairman of the Asian American studies department at San Francisco State University, shows a steady rise in reports of harassment and assault against Asians since mid-March, with twice as many women than men saying they have been mistreated.

Jeung said he expects harassment and violence against Asian Americans to grow in coming months as states reopen their economies and people return to work, school and public life.

"People make automatic assumptions, especially in times of threats, and go into fight-or-flight mode. The fight mode is attacking or harassing Asians, and the flight mode is shunning Asians," he stated further.

Gem Manalo, a Mass General anesthesiology resident who is of Chinese and Filipino descent, was riding the "T," as the subway is called in Boston, across the river to Cambridge for a yoga class in early March when she said a man starting yelling: "F--- China! F--- the Chinese!"Audrey Li, an internal-medicine resident at Beth Israel Deaconess Medical Center in Boston and born to Chinese immigrant parents in New Jersey, who plans to specialize in infectious diseases, said she was repeatedly told by a frustrated patient at another hospital to "go back to your country."But many Asian Americans felt offended by seemingly having to justify their existence. "You people eat bats! It shouldn't matter if you're a front-line worker," said Esther Choo, an emergency-room physician in Portland, Ore., who hosts a podcast on the coronavirus pandemic.

14 ft. crocodile captured by man in Indonesia, returned to nature

SULAWESI, Indonesia: Using just a rope, an Indonesian man, supported by fellow villagers on the island of Sulawesi, captured a ...

WATFORD, UK: Watford F.C. has cancelled a friendly match against the Qatar national team due to the Gulf country's human ...

French urged to conserve energy use to prepare for winter

PARIS, France: Amidst shortages and soaring prices caused by Russia's invasion of Ukraine and subsequent supply cuts, the heads of ...

At this week's G7 meeting, imports of Russian gold to be banned

WASHINGTON D.C.: In the latest in a series of sanctions aimed at further isolating Russia economically over its invasion of ...

MAGWAY, Myanmar - At least eight resistance fighters were killed on Wednesday when junta troops intercepted a truck they were ...

High pressure fracking again being used by US oil companies

WASHINGTON, D.C.: Amidst the rise of "re-fracs" in the U.S. as part of the efforts to boost domestic oil production, ...

Unable to staff airports, Germany to bring in foreign workers

BERLIN, Germany: A German Interior Ministry spokesperson has said that in a bid to relieve airports overwhelmed by staff shortages ...

PARIS, France: In a written statement made this week confirming a report from broadcaster RTL, France's energy ministry said the ...

US farms planting unplanned crops due to chemical shortages

WASHINGTON D.C.: Due to persistent shortages of agricultural chemicals that threaten yields, U.S. farmers have cut back on using common ...