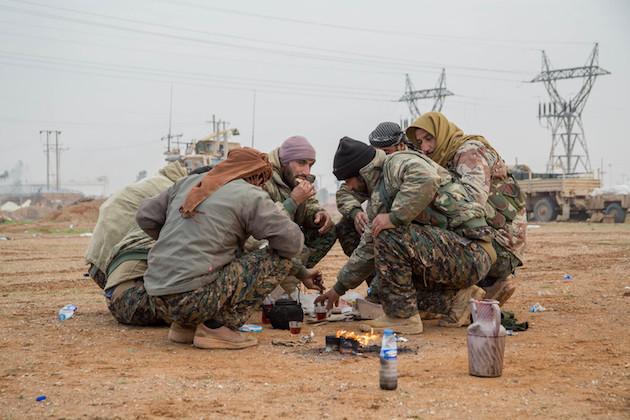 DAMASCUS, Syria - The Syrian government is deploying troops to the north of the country to help the Kurdish-led Syrian Democratic Forces who are dealing with a major offensive being waged by Turkey.

Kurdish sources in Syria they requested the support of the Syrian government.

The extraordinary intervention fills a vacuum caused by the United States, which is now in the process of withdrawing all remaining troops from the area. On Sunday approximately 1,000 troops were vacating an observation post in the town of Kobani in northern Syria.

The Kurds who have been fighting alongside U.S. troops and others to combat ISIS were in their view abandoned by the U.S. with an abrupt decision by President Donald Trump last Sunday to effectively green-light the Turkish invasion.

They may come under criticism for switching allegiance to Syrian President Bashar al-Assad, however in the circumstances they appear to have little option as they were facing a crushing defeat from the Turks who want to drive the Kurds away from the border.

The offensive has resulted in civilian casualties, including a large number of deaths. Turkish soldiers and Kurdish forces are also seeing casualty numbers mount, although no official figures have been released by either side.

A camp which housed relatives of ISIS members has been breached with 800 of those being held making their escape in the wake of the break-out of fighting.

The U.S. military has lamented the abandonment of the Syrian Democratic Forces, who they credit with destroying the physical caliphate established by ISIS.

"The impulsive action of [Turkish] President [Recep] Erdogan to invade northern Syria has put the United States in a tough situation, given our relationship with our NATO ally, Turkey, who has fought alongside the United States in the past; the Syrian Democratic Forces, which have destroyed the physical caliphate of ISIS; and the safety of U.S. military personnel," Army Gen. Mark A. Milley, the chairman of the U.S. Joint Chiefs of Staff told reporters at a press briefing on Friday.

"Rather than get pulled into this conflict, we put the welfare of our soldiers first while urging Turkey to forgo its operation," he added.

Humanitarian aid to continue after UNSC pact on access points

NEW YORK, New York - Sanity prevailed on Saturday as last minute efforts to stitch up a renewal of the ...

MIAMI, Florida - U.S. President Donald Trump went to Florida on Friday for a briefing on what he said has ...

GENEVA, Switzerland - Lebanon, faced with an economy in upheaval, mass protests, and the crippling effects of the coronavirus is ...

The British Armed Forces led their nation in saying farewell to the Forces' Sweetheart with a series of ceremonial tributes ...

SEOUL, South Korea - North Korea says the chances are low for another summit with the United States, after President ...

More than 100 nations have active force of military drones

UK to spend hundreds of millions of pounds on border infrastructure

NEW YORK, New York - U.S. stocks roared on Friday, shrugging off concern about the burgeoning coronavirus in the United ...

SYDNEY, Australia - Stocks in Hong Kong fell sharply on Friday, dragging the rest of the region lower as well.The ...