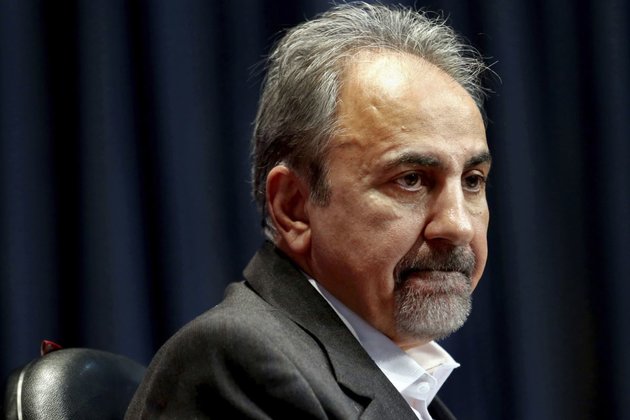 Former Tehran Mayor Mohammad Ali Najafi, recently sentenced to death over the killing of his wife, has had his life spared by her family.

In a post shared on Instagram on August 14, Mitra Ostad's brother said that his father, his mother, and his sister's son 'forgive' Najafi and are no longer appealing for the Islamic law of retribution to be applied -- a so-called 'eye-for-an-eye' form of punishment that would have seen the death penalty applied.

Masood Ostad also wrote that the family hopes the ex-mayor 'in his remaining years...engages in cleansing himself.'

Najafi, 67, was sentenced to death last month after being convicted of murdering his wife earlier this year. He also received a two-year jail sentence for possessing an illegal firearm.

It was not immediately clear if he will be forced to serve time in prison for the murder.

Najafi married Ostad without divorcing his first wife. Polygamy is legal under Islamic laws enforced in the country.

She was found dead at their home in northwestern Tehran on May 28.

Officials said Najafi had surrendered to authorities and confessed to killing her over family issues.

The high-profile case had received extensive media coverage in Iran, where gun violence is rare, especially among the political and economic elite.

Najafi resigned as mayor last year after coming under criticism by hard-liners for attending a ceremony at which young girls were dancing. He cited health reasons for his resignation.

Najafi has also served as one of the country's vice presidents.

With reporting by AFP

BRUSSELS, Belgium - NATO was holding an emergency meeting of the North Atlantic Council on Friday following the death of ...

PERTH, Western Australia - The biggest explosion in the universe after the Big Bang has been discovered by scientists studying ...

Philippines military focuses on self-reliance for when U.S. forces go

MANILA, Philippines - The Philippine military said Thursday that its armed forces would survive and safeguard the nation from internal ...

59% of Venezuelan housholds not in position to buy enough food

CARACAS, Venezuela - Hyperinflation in Venezuela means that roughly one-third ofthe population more than nine million people do not get ...

NEW YORK, New York - Fears about the spreading coronavirus, which now has cases reported in nearly 60 countries around ...

TOKYO, Japan - A deepening health crisis became an economic one too Friday, with the virus outbreak sapping financial markets, ...

Pakistan halts flights to and from Iran

ISLAMABAD, Pakistan - Pakistan on Thursday announced the suspension of all flights to and from Iran -- the Middle Eastern ...

British employment figures good, but growth in wages is non-existent

A first glance at the latest commentary from the Office for National Statistics (ONS) on the UK labour market in ...