Ukraine's Government Backs Away From Fight With Kyiv Mayor Klitschko 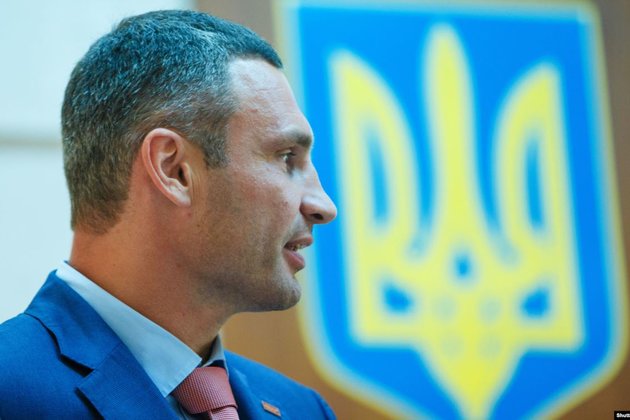 Ukraine's government says it will not seek to take away part of Kyiv Mayor Vitali Klitschko's executive powers, at least for now.

Vasyl Ryabchuk, spokesman for Prime Minister Volodymyr Hroysman, wrote on Facebook on August 14 that the cabinet decided not to be involved in the issue following weeks of rumors that it may relieve the former heavyweight boxing champion of his powers as head of Kyiv's city

'My journalist colleagues, I am answering all of you at once. The issue on the consensus regarding relieving Vitaliy Klitschko of his duties was discussed by the government members. The decision was made that the Cabinet's current staff will not look into it.'

Ryabchuk did not say whether a cabinet shuffle should change the stance concerning Klitschko, who has been locked in a power struggle with President Volodomyr Zelenskiy over the position.

While Kyiv citizens elect a mayor, the president appoints and dismisses the head of the Kyiv city administration at the behest of the government. Traditionally, the mayor has held both positions to allow smoother governing of the capital region.

Klitschko has held the executive seat of Kyiv since June 2014, with his current mandate expiring in October this year.

Zelenskiy on July 24 asked the Cabinet of Ministers to dismiss Klitschko, who has vowed that he 'won't give up.'

A December 2003 Constitutional Court ruling said that the mayor has exclusive rights to select the city administration head.

In an earlier interview with RFE/RL, Klitschko said that the actions of Zelenskiy's staff 'smell of authoritarianism,' adding that if he loses his city management powers, he'll go to the courts, as well as to 'the public, we'll take all the steps to prevent this.'

BRUSSELS, Belgium - NATO was holding an emergency meeting of the North Atlantic Council on Friday following the death of ...

PERTH, Western Australia - The biggest explosion in the universe after the Big Bang has been discovered by scientists studying ...

Philippines military focuses on self-reliance for when U.S. forces go

MANILA, Philippines - The Philippine military said Thursday that its armed forces would survive and safeguard the nation from internal ...

59% of Venezuelan housholds not in position to buy enough food

CARACAS, Venezuela - Hyperinflation in Venezuela means that roughly one-third ofthe population more than nine million people do not get ...

NEW YORK, New York - Fears about the spreading coronavirus, which now has cases reported in nearly 60 countries around ...

TOKYO, Japan - A deepening health crisis became an economic one too Friday, with the virus outbreak sapping financial markets, ...

Pakistan halts flights to and from Iran

ISLAMABAD, Pakistan - Pakistan on Thursday announced the suspension of all flights to and from Iran -- the Middle Eastern ...

British employment figures good, but growth in wages is non-existent

A first glance at the latest commentary from the Office for National Statistics (ONS) on the UK labour market in ...