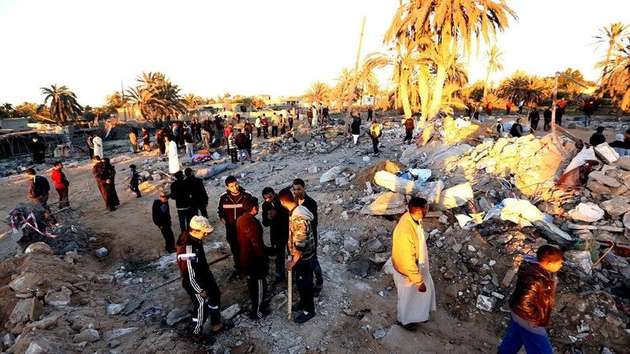 Two Serbian embassy officials who were said to have been held hostage since November have both died in U.S. airstrikes that killed dozens in western Libya.

U.S. warplanes, American F-15Efighterbombers had carried out an airstrike on a suspected militant camp in western Libya, targeting Noureddine Chouchane, identified by the Tunisian government as a suspect in the attack at the Bardo Museum in the Tunisian capital of Tunis.

Reportedly, a Libyan armed group calling itself the Special Deterrent Forces announced on Facebook that the two bodies had been delivered to Tripoli's Matiga Airport. The group posted pictures showing two green coffins inside a hearse, and another coffin sitting on a tarmac next to a small plane.

Prime Minister Aleksandar Vucic confirmed that Sladjana Stankovic, a communications officer, and Jovica Stepic, a driver, were killed in the American bombing.

As a response, Serbian officials have questioned why the Americans did not appear to know that foreign captives were at the site.

Vucic has said that he has written to U.S. officials in Washington seeking a formal explanation.

A U.S. official said American forces had "no information indicating that their deaths were a result" of the airstrikes.

Meanwhile, addressing a press conference Vucic said, "Apparently, the Americans were not aware that foreign citizens were being kept there. But that will always remain an unknown fact to us."

Both embassy officials were said to have been taken as hostages after their diplomatic convoy, including the ambassador, came under fire near the Libyan city of Sabratha.

Humanitarian aid to continue after UNSC pact on access points

NEW YORK, New York - Sanity prevailed on Saturday as last minute efforts to stitch up a renewal of the ...

MIAMI, Florida - U.S. President Donald Trump went to Florida on Friday for a briefing on what he said has ...

GENEVA, Switzerland - Lebanon, faced with an economy in upheaval, mass protests, and the crippling effects of the coronavirus is ...

The British Armed Forces led their nation in saying farewell to the Forces' Sweetheart with a series of ceremonial tributes ...

SEOUL, South Korea - North Korea says the chances are low for another summit with the United States, after President ...

More than 100 nations have active force of military drones

UK to spend hundreds of millions of pounds on border infrastructure

NEW YORK, New York - U.S. stocks roared on Friday, shrugging off concern about the burgeoning coronavirus in the United ...

SYDNEY, Australia - Stocks in Hong Kong fell sharply on Friday, dragging the rest of the region lower as well.The ...